Unfortunately, no test can detect infection with HIV immediately after exposure accurately. The time between exposure and when a test becomes effective is known as the window period. While testing for HIV is getting better, it is not perfect. It is possible to get a false negative HIV test result, especially if testing within the window period.

Reviewed by Tzvi Doron, DO

The last time you saw your healthcare provider, he or she may have asked you if you wanted to be screened for human immunodeficiency virus (HIV). Whether you think you may have HIV or not, screening is important and a good way to make sure everybody who needs treatment is receiving it. According to the Centers for Disease Control and Prevention (CDC), approximately 14% of those who were infected with HIV in 2011 were undiagnosed (Irene Hall, 2015). And while men who have sex with men (MSM) account for ~70% of new HIV diagnoses, everybody – including women and infants – are at risk of acquiring HIV. Identifying unknown cases of HIV is also important when it comes to preventing the further spread of HIV in the community.

Currently, the CDC recommends screening for HIV at least once in individuals between the ages of 13 and 64 (CDC, 2019). They also offer the specific recommendation that MSM be screened annually (and even as frequently as every three to six months depending on risk factors). Additionally, the United States Preventive Services Task Force (USPSTF) recommends screening at least once in individuals ages 15 to 65, as well as in all pregnant women (USPSTF, 2013). Other people at high risk of acquiring HIV who should consider screening at least annually include (Sax, 2019):

Diagnostic HIV testing can also be done if your healthcare provider is concerned you may have HIV. This can be based on your medical history or based on the symptoms you are experiencing. Testing for HIV requires informed consent from the patient. This means that your healthcare provider must explicitly let you know that they are checking for HIV. Depending on the state you live in, different types of informed consent may be required. Written informed consent used to be more common but has fallen out of favor (Bayer, 2017). Consent for HIV testing is now typically divided into opt-in testing or opt-out testing. Opt-in testing means you are told the test is available and you have to ask for it to be done; opt-out testing means you are told a test will be performed and you have to explicitly decline if you do not want it to be done. The CDC recommends opt-out testing be adopted by all healthcare facilities because evidence shows that it leads to higher overall testing rates (Galletly, 2009).

But what is HIV testing like? What do you need to do, and when will the results be available? Well—it depends. Let’s do a quick refresher on what HIV is before diving into the different types of tests that can look for it.

HIV is a virus that infects the immune system of humans; specifically, the CD4+ T cells. While HIV is typically thought of as a sexually transmitted infection (STI), it can also be transmitted from mother to child during pregnancy and breastfeeding or through contact with infected blood, such as by sharing needles during IVDU.

HIV infection progresses in stages that are characterized by different symptoms. Without treatment, the full progression of HIV from exposure to end-stage AIDS can take over ten years. The stages are:

HIV is an RNA virus, which means its genetic information is stored on bits of RNA. The rest of the virus is made up of proteins and a lipid membrane. Some of the proteins act as antigens in the body, which means that when the human body is exposed to them, the body mounts an immune response. The antigen that most screening and diagnostic tests look for is called p24. p24 is a protein that forms the capsid, the protective shell around HIV’s genetic information. In response to exposure to p24 and other antigens, the human body creates antibodies. However, antibodies can take 2-12 weeks to develop, which is an important point when discussing testing options for HIV.

How was HIV testing developed?

The first test to look for HIV was developed in 1985. The test used a technique called indirect ELISA, and it did not look for HIV directly. Instead, it was an antibody test, meaning it could detect antibodies that the body made to the virus. Because the body takes up to 12 weeks to mount a sufficient antibody response, the indirect ELISA test could not accurately identify HIV within that 12-week window. Additionally, techniques called western blot or immunoassay were needed to confirm positive results.

The overall goal of improving HIV testing has been to develop tests that offer:

What kinds of tests are there to diagnose HIV now?

More than 30 years later, several different types of HIV testing are available. These tests differ based on what they test for, how they are performed, how accurate they are, and how soon after exposure, they can be reliable. Unfortunately, no test can detect an infection with HIV immediately after exposure accurately. The time between exposure and when a test becomes effective is known as the window period. The main categories of available tests are (Sax, 2019): 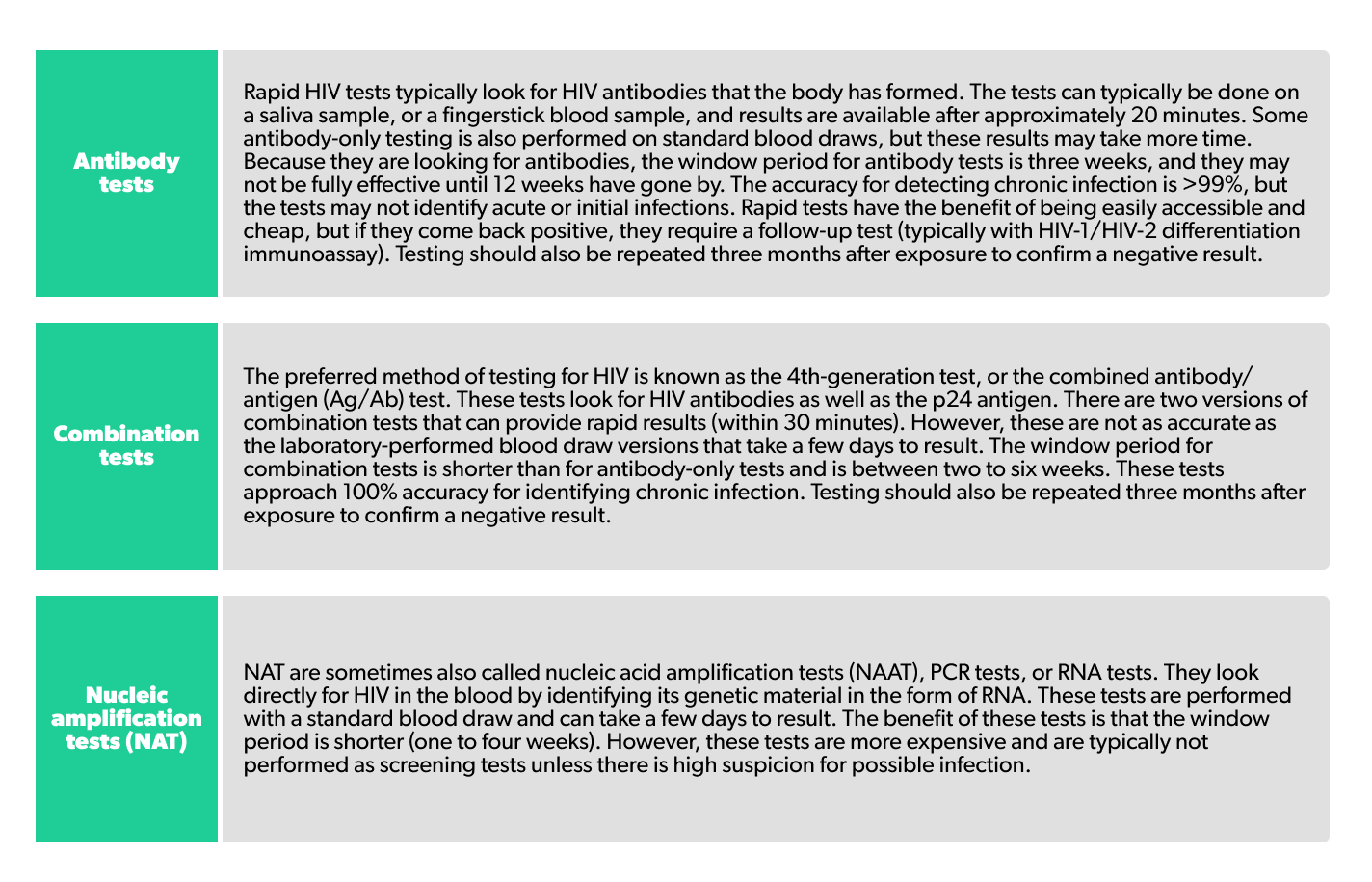 While testing for HIV is getting better, it is not perfect. It is possible to get a false negative HIV test result (when your test comes back negative, but you do have HIV), especially if testing within the window period. The best way to ensure you are HIV-negative is to continue to undergo regular HIV screening.

What kinds of tests are there for those who already have HIV?

After diagnosis, care for HIV is lifelong. This means it is vital for all HIV-positive individuals to stay connected to healthcare, to remain compliant with treatment, and to undergo recommended laboratory testing.

Two lab tests that are frequently done in HIV-positive individuals check for the CD4 count and the viral load. These are good tests for monitoring how well HIV is controlled. The CD4 count indicates how many CD4+ T cells an individual has. As HIV advances, this level drops. When the CD4 count drops below 200 cells/mm3, an individual is diagnosed with AIDS. The viral load indicates how much of the virus is in the body. It is possible for people who have been compliant with treatment to have an undetectable viral load. This means that the level of virus in the blood is so low that it cannot be detected by current tests. Of note, this does not imply an individual is cured of HIV; if he or she were to stop taking medications, the viral load would increase back to detectable levels.

Healthcare providers typically check these values every 3-4 months. Additionally, according to HIV.gov, values should be checked before starting any new HIV medications and two to eight weeks after starting or changing any HIV medications (HIV.gov-a, 2017).

There are a few other blood tests that a healthcare provider may want to do to monitor HIV and to assess the overall health of somebody with HIV. These additional tests include but may not be limited to genotyping of HIV to see what treatments would be most effective, a complete blood count (CBC), a test for electrolyte levels, a test for cholesterol levels, blood sugar testing, hepatitis testing, tuberculosis testing, toxoplasmosis testing, screening for other STIs, and pregnancy testing (HIV.gov-b, 2017).

This is what it means to have undetectable HIV

Where can HIV testing be done?

To be tested for HIV, all you have to do is ask your healthcare provider. Whether you are in the emergency room, an urgent care center, or a doctor’s office, they should be able to perform the test on-site or should be able to give you an order form to have the test performed at a local lab. Some of the larger laboratory chains include LabCorp and Quest Diagnostics.

Many parts of the country also have clinics that are specifically designed to test for and treat issues of sexual health. These include Planned Parenthood, other sexual health clinics, and mobile clinics. Testing is always confidential, and in many of these locations, it is either free or low-cost (with payment determined by your income).

Some testing sites may only have rapid antibody testing available. When this is the case, if a test comes back positive, you may be referred elsewhere for confirmatory testing.

Lastly, it is now possible to be tested for HIV in your own home. A company called OraQuick makes an at-home test that can be purchased over-the-counter from a typical pharmacy. The OraQuick In-Home HIV Test is a test that is done by performing a mouth swab and checking the saliva/oral fluid for antibodies to HIV (OraQuick, n.d.). Results are typically available in approximately 20 minutes. The benefits of using OraQuick are that you can test yourself whenever you want, even if you can’t make it to a healthcare provider in the near future.

Additionally, testing can be done in complete privacy. The downsides of using OraQuick are that, if you test positive, you would still need to undergo confirmatory testing. Additionally, having a positive test can be very distressing. While OraQuick offers counseling and referral services, you may not have in-person support available to you to discuss what your results mean. Because of these pros and cons, some people may find OraQuick to be useful while others would do better with in-person testing and review of results.

How is HIV treated?

The hallmark of HIV treatment is called antiretroviral therapy (ART). This includes several different medications that act against different stages in the life cycle of HIV. Proper treatment typically involves a combination of two or three antiviral drugs. It may be necessary throughout treatment to change or switch medications if they begin to lose efficacy.

Living with HIV can be different for everybody, and it is difficult to predict how a diagnosis of HIV can change an individual’s life. Currently, there is no cure for HIV, and treatment is lifelong. This means taking oral medications daily and repeatedly checking in with a healthcare provider. The good news is that, with proper treatment and control of the infection, the life expectancy of HIV-positive individuals is approaching that of uninfected people.

There is a lot more that comes with a diagnosis of HIV than just the virus, though. Since it was discovered, HIV has been shrouded in stigma and shame. People who find out they are HIV-positive may internalize these feelings, may feel distressed or depressed and may be fearful of discussing their condition with others. There is no judgment against those who have this reaction. However, it can be detrimental to health and lead to a poorer overall outcome if it means an individual does not seek out treatment. Many resources are available that are geared towards counseling individuals about their diagnosis. For a list of resources and other local services that provide psychosocial support, search the internet, or speak with your healthcare provider.

This is what it means to have undetectable HIV

Is an HIV cure possible? One seems to be getting closer