The ins and outs of the IUD: IUD side effects, effectiveness, and cost

Intrauterine devices, or IUDs, are not new birth control options — but their popularity is rising. 8% of women ages 15-49 in the United States choose IUDs to keep watch over their uteruses. And in the last few years, there’s been a rather, well, interesting spike in IUD use. According to both Athena Insight and Planned Parenthood, IUD demand has increased exponentially since November 2016. 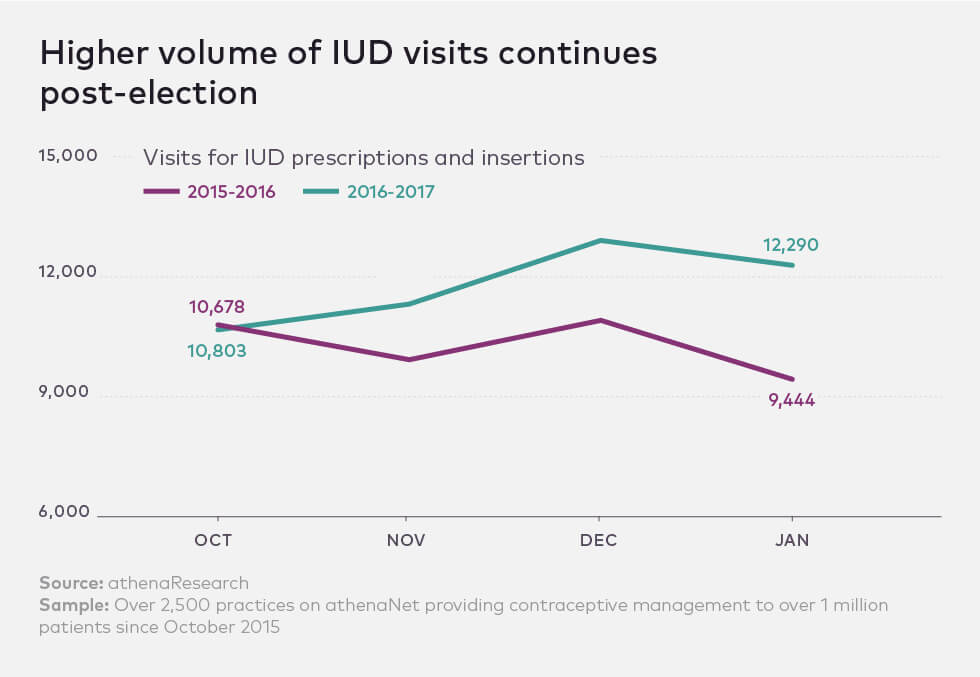 Many say that IUDs are the most effective form of birth control on the market today — and study after study deems them safe for women of all childbearing ages. A 2015 study even showed that women’s healthcare providers use IUDs more than any other form of contraception. (We’ll have what they’re having!)

So let’s get into it! In this piece, you’ll find out:

Find the right birth control for you

Birth control based on your health, preferences, and goals—delivered to your door

How does the IUD work?

The IUD is a small T-shaped device (adorable, really) that takes about five minutes to place inside your uterus. There are two types of IUDs: hormonal and copper (non-hormonal). And FYI: Conception is defined as a fertilized egg implanting in the uterine wall. So, the abortion fear of IUDs isn’t an issue because conception never actually occurs.

How the hormonal IUD prevents pregnancy: sperm shall not pass

Mirena, Skyla, Liletta, and Kyleena are not just excellent names for your new puppy — they’re the four brands of hormonal IUDs currently available. (Also, please let us know if you name your dog after an IUD — because that would be awesome.)

The differences between these three brands are:

How the copper IUD prevents pregnancy: not a sperm favorite

The other IUD option is the copper IUD (brand name: Paragard). The copper IUD prevents pregnancy by releasing copper ions into your cervix — no hormones here. Copper makes your uterus a pretty hostile environment for sperm for up to 10 years.

And on top of all that, copper actually, um… decapitates sperm. So, yeah, no fertilization.

The upsides, the downsides, and the good-to-knows

Now that you know the different types of IUDs and how they work, let’s talk through everything from side effects to costs, so you can make the most informed decision for yourself.

What are the advantages of an IUD? Here’s why they’ve been increasing in popularity:

You may be wondering why IUDs haven’t always been a fan favorite. There was a big controversy — call it the IUD version of “Serial” — in the ‘80s that gave them a pretty bad rep. It all had to do with the release of the Dalkon Shield, a faulty IUD that let bacteria into the uterus causing inflammation, infection, and infertility. Not good.

The incident ruined the USA’s trust in IUDs for years to come. Meanwhile, the rest of the world charged ahead. China, France, and Scandinavia kept on using their safe and effective IUDs (fun fact: 25% of Scandinavian women rely on IUDs!).

We now have nearly 30 years of science to back up the fact that IUDs are safe and effective. Now, that doesn’t mean there aren’t risks (we’ll get into those a bit later), but all IUDs recommended by doctors today are FDA-approved.

What are the side effects of IUDs?

Although IUDs are perfectly safe and effective, they’re not a magical, risk-free answer to birth control (even if they might seem that way) — they do have listed side effects. These side effects are primarily related to their effects on your monthly bleeding pattern.

Paragard copper IUDs can cause heavier and crampier periods. And for some patients, this can lead to anemia. Other listed side effects include:

The most common side effects associated with Mirena, Kyleena, and Liletta include:

Skyla’s most common side effects include:

Both the hormonal and non-hormonal forms of IUD come with the risk of accidental “perforation,” or, well, a hole in the uterus and “expulsion” of the IUD. Expulsion, you ask? Yeah. There is a small chance that the IUD can slip out of your uterus. Planned Parenthood assures us that this is very rare (occurring between 2 and 10% of women), and usually due to improper insertion.

According to the Mayo Clinic, your IUD is more likely to be expelled if:

Doctors do a check of the IUD’s strings (there are little teenie strings on the bottom of the IUD for removal) about 2-3 months after insertion to make sure it’s in there nice and snug.

How can an IUD impact fertility?

As we’ve mentioned, an IUD is long-term birth control. So what happens when you get it removed? Can you get pregnant right away?

When you stop taking hormonal birth control, there are side effects, which vary from person to person, as your body returns to its pre-BC state. However, when it comes to your post-IUD fertility, a 2011 report that reviewed the literature about hormonal IUDs confirmed that “normal fertility is regained after a few months, with a near-normal 80% of women able to conceive within 12 months.”

According to a 2015 study of 69 former IUD users (50 copper and 19 hormonal) and 42 former non-IUD users, there was no difference in the time to pregnancy in IUD users compared to non-IUD users. Black women did demonstrate a significant statistical difference in terms of fertility, however, which authors plan to address in a larger study.

Depending on what kind of IUD you use, you might be able to get pregnant immediately after your IUD is removed. If you don’t want to conceive right away, it’s a good idea to avoid vaginal sex at least seven days before you get your IUD removed, depending on when you ovulate, and to use another form of birth control if you do have sex.

Here’s what does have the potential to adversely impact your fertility:

When you’re getting your IUD removed, it’s important to note that you may experience some slight cramping during and right after removal. Severe bleeding is rare, so talk to your doctor if you’re bleeding heavily after IUD removal.

How much does an IUD cost (and will insurance cover it)?

Without insurance, an IUD alone can cost between $500 and $1,000, but if you do have insurance, an IUD can be super low cost — or even free. The Affordable Care Act mandates that birth control, including the IUD, is covered by insurance plans, but you should check in with your provider to be sure. Planned Parenthood also offers programs that make getting birth control, including IUDs, affordable for folks without insurance.

Keep in mind, though, that the total cost of your IUD involves more than just the actual device. You should factor in:

While the cost of an IUD without insurance is more expensive than other birth control methods like the pill, remember that it’s long-term birth control, so once it’s in, you’ve got as many as 10 years (depending on what kind of IUD you have) before you need to think about spending that money again. In fact, one study even suggests that it’s one of the most cost-effective contraceptive options we have.

To IUD or not to IUD?

Despite the warnings, studies have deemed both IUD types as “highly acceptable with few unanticipated side effects.” And although the copper IUD is slightly more effective (with pregnancy rates between 0.3% and 0.6%), the hormonal IUD is only slightly less effective (<0.5%).

So, which to choose? Talk to your doctor and they’ll walk you through the options. They’ll make sure you’re a great candidate by:

Who should and shouldn’t get IUDs

IUDs are a great birth control option for many women, but, according to Planned Parenthood, you may not be a good candidate for an IUD if you:

And you should avoid the non-hormonal Paragard IUD if you:

In some rare cases, uterine size or shape could make it difficult to insert an IUD. But, like we mentioned earlier, your doctor will walk you through whether or not the IUD will work for you — and there are plenty of other choices if it won’t!

If your doctor does deem IUDs as appropriate for you, there’s a huge perk for anyone suffering from PMDD, or premenstrual dysphoric disorder — studies show that IUDs, among other forms of contraception, may be very helpful in treating the symptoms.

How is the IUD inserted?

Your gynecologist “installs” (not the medical term, but that’s definitely what it feels like) the IUD into your uterus using a small insertion device. There is speculum action. There is cramping action. There is spotting. It’s not I-need-to-lie-in-my-bed-right-now cramping, but almost. And how to describe the feeling? It’s not a tampon in your vagina feeling — it’s an “oh… oh okay, that’s different,” kind of feeling.

Overall, it’s not excruciating — but it’s not comfortable. Your doctor may recommend taking an ibuprofen or two one hour before your appointment. And then you’ll go about your life (and sex life), enjoying the perks of sexual empowerment knowing you’re locked and loaded with safe, effective contraception. Check in with your doctor monthly to make sure everything’s working as it should!

What’s it like to get and have an IUD?

Christine calls her Mirena IUD “a godsend.” She needed a birth control method that made “less of an impact” on her hormones, and “as someone who is massively impacted by hormones, it’s been a breeze. Not getting a period is the best.”

Sarah had similar feelings: “My periods are light to non-existent. I never have to think about taking a pill. I haven’t experienced any weight gain or heightened emotions. I feel steadier than ever, as if PMS has been mitigated.”

And for some women, like Kate, the IUD just straight up wasn’t right. Kate says, “My copper IUD made me bloated and gave me a heavier period than ever. I had it removed a few months in. I may try a hormonal one down the road, but I’m not sure it’s the right thing for my body.”

Remember, remember, remember that IUDs protect against pregnancy, but not in the slightest against STIs. If you and your partner haven’t been tested for all of the things, keep the condoms handy. We’re here to arm you with info, but only your doctor can give you medical advice. If you’re thinking through BC options, talk to them first.

This article was medically reviewed by Dr. Eva Marie Luo, an OB-GYN at Beth Israel Deaconess Medical Center and a Health Policy and Management Fellow at Harvard Medical Faculty Physicians, the physicians organization affiliated with the Beth Israel-Lahey Health System.